Breathing to Improve Health and Performance

Even though we breathe about 20,000 times per day, breathing doesn’t always get a lot of attention. However, whether your goals are improved sport performance, general fitness, or just stress reduction, proper breathing can be a helpful tool to employ on your journey.

Shallow breathing is a common movement fault that’s easy to fall into, and it can cause health and performance problems.

Shallow chest breaths inhibit the diaphragm’s ability to function. The lungs receive less oxygenated air, which can make you feel short of breath. Shortness of breath can lead to a feeling of anxiety, difficulty sustaining focus, and a dominant sympathetic nervous system (fight or flight).

Consistent shallow breathing may also lead to problems with mobilizing the rib cage, which can cause major movement dysfunction. Since movement generally originates proximally (near the center of the body), the structures around the rib cage, like the scapulae, will also be inhibited, resulting in poor movement.

Poor posture, such as lordosis (excessive extension of the lumbar spine), and hypertrophy of accessory breathing muscles near the neck and collarbone can also result from shallow breathing.

When breathing is shallow, the rib cage is drawn up, rather than out, which doesn’t allow the diaphragm to be used to its full capability. In order to maximize air intake, other muscles such as the sternocleidomastoid (SCM) and scalenes have to assist. During more demanding activities these accessory breathing muscles play a necessary role, however, they should not be used as heavily during normal respiration. 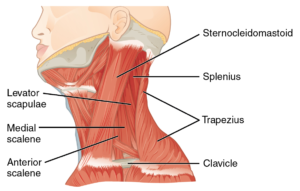 How Should You Breathe?

Diaphragmatic breathing is ideal as this engages the diaphragm, which pulls down on the lungs and pushes against the muscles of the abdomen in order to make room for the lungs to expand. When you breathe out the diaphragm pushes back up against the lungs forcing carbon dioxide out. Breathing diaphragmatically allows the rib cage to externally rotate as you inhale and internally rotate as you exhale; allowing for greater functional movement originating from the thorax.

Changing your breathing mechanics may seem like an unnecessary task. After all, you’ve made it this far breathing the way you do. However, there are a ton of benefits associated with diaphragmatic breathing.

Along with the performance benefits that study showed, another study performed by Martarelli et al. found that diaphragmatic breathing after an exhaustive exercise session resulted in a lower level of oxidative stress.

Along with these health benefits, diaphragmatic breathing is important for properly bracing the core during movements in the weight room. Bracing is the act of tightening your core through increased intraabdominal pressure. It keeps your spine in a safer position through the redistribution of stress, and it allows for the transfer of force from your lower body to your upper body.

How and When To Use It

Diaphragmatic breathing can be used as both an activation and recovery tool. Prior to training diaphragmatic breathing exercises should be used to activate necessary muscles to help improve alignment and movement quality, and inhibit muscles that are over activated during compensatory movement patterns. Basically, get your breathing right before you train so you can properly brace your core during your movements in the weight room and avoid movement faults.

Post training these breathing techniques should be used as a tool to kickstart recovery and get athletes into a more parasympathetic state.

Give these drills a try.

The goal with these drills is to get into a neutral spine and pelvis position in order to resist compensations and increase the use of the diaphragm.

Since focus and overall health are positively affected by diaphragmatic breathing, it has serious application to improved athletic performance and warrants inclusion by any serious athlete.

“Figure 8. The superficial and deep muscles of the neck are responsible for moving the head, cervical vertebrae, and scapulas.” by OpenStax CC BY 4.0

Legg T, Dix M (2017) Everything You Should Know About Oxidative Stress. Healthline.com