Conditioning for Pitchers: Will Cardio Kill Your Velo? 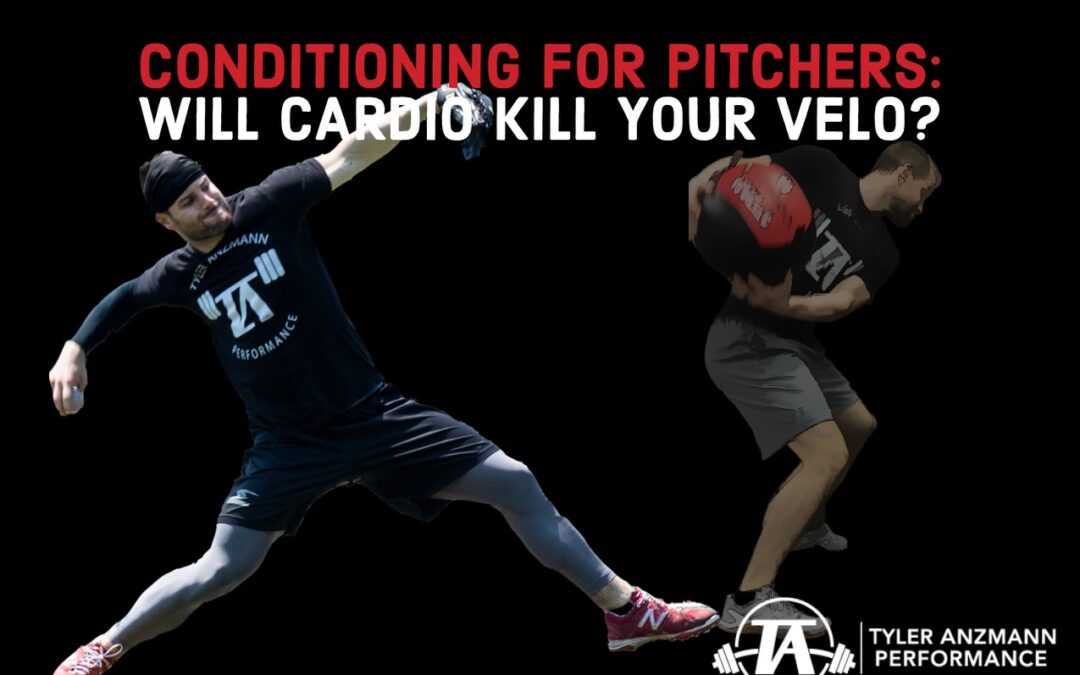 While training for pitchers has become significantly better over the last decade or so, the  fear around the dreaded “conditioning” may have gone too far. Running poles has been shunned (and we have the shirts to prove it), but surely not all conditioning will destroy your velo gainz right???

The first piece to consider when discussing conditioning is that it can be a broad term and must be specifically defined in terms of the needs of the athlete. For example, while conditioning for a marathon runner is running at a slow to moderate pace for an extended period of time, conditioning for a pitcher involves repeating 1-2 seconds of near maximal effort movement every 20 seconds or so (with some variance in volumes depending on the specific role of the pitcher). So, it seems unlikely both of these athletes would be trained the same way to improve their conditioning, right? Right.

Baseball is an anaerobic-alactic sport, meaning that it involves brief periods of high intensity effort, interspersed with longer periods of rest. So, why should you even care about aerobic conditioning? First, better aerobic fitness will allow you to recover better between pitches, meaning an increased ability to sustain a high level of output during a game. Second, you’ll be able to perform a greater volume of high-quality training, leading to improved development. Third, you’ll recover better between training sessions and games, again leading to higher quality training sessions, more training in a given time period, improved development, and on-field performance.

A Quick Primer on the Energy Systems

There are three main energy systems involved in the synthesis and utilization of ATP, which is a molecule that provides energy for muscular contraction and other cellular processes. These systems do not work alone, but rather all work together in varying degrees depending on the activity.

This system is the predominant system when short duration, high intensity movements are performed. Based on the name two things should be obvious-it does not require oxygen and it does not produce lactate. It can provide energy for about 10 seconds via stored ATP and the synthesis of ATP via the donation of the phosphate group from phosphocreatine (CP).

This system is the predominant system when high intensity movements are performed beyond what the anaerobic-alactic system can provide energy for, up to about a minute or so of activity. It also does not require oxygen, utilizes glycogen (stored carbohydrates), and does result in the accumulation of lactate.

This system is the predominant system when you are resting or performing low intensity activity. It synthesizes ATP in the mitochondria via the interaction of oxygen, specific enzymes, and fatty acids, glycogen, or amino acids.

If aerobic fitness is so great, why have poles gotten such a bad rap? Well, an important component of true aerobic (not lactic) training is managing intensity. In this case we’re looking to stay in the lower portion of the aerobic development zone: between 50 and 70% of max heart rate (MHR). Training in this zone leads to increased capillary density which can lead to an improved ability to maintain body heat, increased blood flow to soft tissue leading to greater nutrient delivery and metabolic byproduct removal. Low intensity training in this zone can improve recovery between high intensity sessions via the processes outlined previously as well as its role in getting athletes into a parasympathetic state (rest and recover), allowing neural fatigue to dissipate.

The biggest problems with running poles and other “cardio” within baseball circles have been the inappropriate intensity and volume. When the intensity creeps above the threshold of this low zone, problems arise. We know from research that endurance type training above these low intensities performed concurrently with strength training can diminish the potential strength gains (Bell et al., 2000) (Kraemer et al., 1985). The first problem is related to the nervous system. When we train at a high intensity (think lifting really heavy, running fast, or throwing hard) it takes 48-72 hours for our nervous system to be ready to go at that intensity again. When we get into the lactic, or medium intensity zone, the intensity is too high to enhance recovery (or not interfere), and too low to drive speed or strength adaptations. This means we’ve essentially performed a high intensity session in terms of the recovery required, without gaining any of the performance benefits. One of the other problems that can arise is a fiber type shift if the intensity gets into this medium zone. What this means is that type II or fast twitch fibers will be forced to perform the role of type I or slow twitch fibers and begin to take on the characteristics of these slower fibers (Jansson, 1978). Finally, as pitchers are often larger athletes and may not have exceptional running form, high impact volumes during running poles may cause orthopedic issues that tip the risk-reward scales out of balance.

The frequency, intensity, volume, and specific means of conditioning work will depend on the athlete’s needs and the time of year. In general, we’ll use 2-3 conditioning sessions per week with most athletes and the methods used vary a bit. A few general rules of thumb: breathe through your nose the whole time (stay tuned for another article where we address this in more detail), be able to talk comfortably (not barely getting words out, but speaking clearly without a ton of effort), the first rep and the last rep should be performed at the same intensity with the same effort, and if you’re not sure undershoot intensity-remember this is LOW intensity. The goal should be to leave the session feeling better than you did when you walked in. The means we employ include:

Methods can be specifically applied to athletes based on needs and time of year. For example, if we’re in a general offseason phase and we have an athlete who needs to improve their elastic and high velocity outputs, more exposures to plyometrics may be warranted. Obviously, this would be built to via previous phases of extensive exposures. But, high days may utilize intensive plyometrics in relatively low volumes, while low days (or conditioning days) may involve higher volume exposure to extensive plyometrics. Athletes who are limited due to injury issues, may be better served using low impact means such as mobility circuits or medicine ball circuits.

Conditioning gets a bad rap in the baseball world, and based on how poorly baseball players have trained in years past it may be warranted. However, this shouldn’t mean that aerobic development is completely ignored. In fact, the development of this energy system may enhance performance significantly for athletes who struggle to recover between outings or training sessions. As with all training methodologies it’s important to understand principles so that means can be adapted to each individual’s needs.