Warming Up for Your Best Velocity

In order to have opportunities at the elite level, many pitchers work to increase throwing velocity. However, many factors affect the process of increasing velocity and the degree to which a pitcher is successful. One area that athletes often ignore is the quality and structure of their warm up. By making relatively simple changes to their warm up an athlete may be able to make improvements in throwing velocity.

Whether you’re new to training or you’ve been training for years, the warm up may be an overlooked or ignored part of your training program. However, not only is a warm up important for a higher level of performance, but it can also help keep you healthy.

Components of a Warm-Up

Self myofascial release (SMR) or foam rolling has some benefits when it comes to tissue preparation as well as recovery depending on when it is used. However, foam rolling should not become an all-consuming obsession.

Doing some foam rolling or targeted releases prior to training or playing can be beneficial, especially for athletes with specific mobility restrictions as a result of poor tissue quality. According to a study by Beardsley et al. SMR may acutely increase flexibility and reduce muscle soreness without impeding athletic performance (Beardsley, 2015). This is especially important for pitchers who have range of motion (ROM) deficiencies or minor pain at specific joints. SMR prior to training or playing could lead to acute effects that could help improve specific ROM deficiencies and therefore improve velocity. 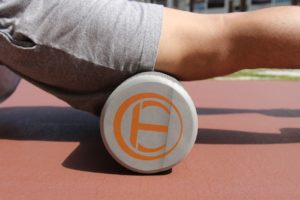 For example, if your horizontal abduction (think scap load) is limited and you get some targeted pec minor work done prior to throwing, you may notice improved range of motion and a looser (subjectively) arm action.

However, SMR may also acutely increase parasympathetic nervous system activity, which is why it may be beneficial as a recovery technique in the post-training period (Beardsley, 2015). There is currently no consensus on optimal SMR, therefore if it is being used prior to training or playing, I would suggest limiting SMR to 10-20 minutes.

Pitching requires the ability to access extreme ranges of motion in order to get into the positions necessary to throw at high velocities. If stepping on the mound is the first time you’ve attempted to get into those positions that day, you’ve got a recipe for disaster. Not only are you possibly increasing your injury risk, you are unlikely to perform at your best. Activity-specific warm-ups, which include movements and dynamic ROM needed for the intended activity, may improve performance.

For example, significant hip extension, thoracic rotation, and horizontal abduction are just a few of the movements needed during the throwing motion, therefore adding some of these drills into your pre-throwing plan may be beneficial to your overall performance.

Another goal of the warm up is to increase your body temperature. Generally, you want to be sweating before you pick up a ball.

A study by Wright et al. found that performance metrics such as working memory, subjective alertness, visual attention, and the slowest 10% of reaction times improved as a result of higher body temperature (Wright, 2002). Higher muscle temperature may also lead to improvements in muscle performance as well as an increase in muscle contraction speed and reduction in reaction time via an increase in nerve transmission velocity (Andrade et al., 2015).

It is important to remember however, that higher body temperature should not be achieved through high volumes of aerobic work as this may have a detrimental effect on performance.

Neural drive is an extremely important part of baseball. The ability to throw hard, swing hard, and run fast all require significant intent, which is just a simplified way of saying neural drive. So, preparing your body for high output by getting to the optimal level of mental and physical arousal prior to performing may be beneficial.

A study by Andrade et al. found that using jumps as a warm-up improved both slow and fast stretch shortening cycle performance, and specifically improved performance in the squat jump, countermovement jump, and depth jump (Andrade, 2015).

What are some ways to do this in the context of improving velocity? Well, your warm-up should include some maximum effort movements, in low volumes, at the end of your warm-up. Some examples of these are; max effort medicine ball slams or throws, lateral bounds, broad jumps, or counter movement jumps.

Here’s a sample warm-up you can try:

Overall, warm-ups tend to improve performance in the activities that follow (Fradkin et al. 2010, Andrade et al. 2015). Depending on the quality and specificity of your current warm-up, including an overhauled or tweaked warm-up, may yield some velocity improvements. Give it a try!