Why Training to Failure Inhibits the Development of Throwing Velocity 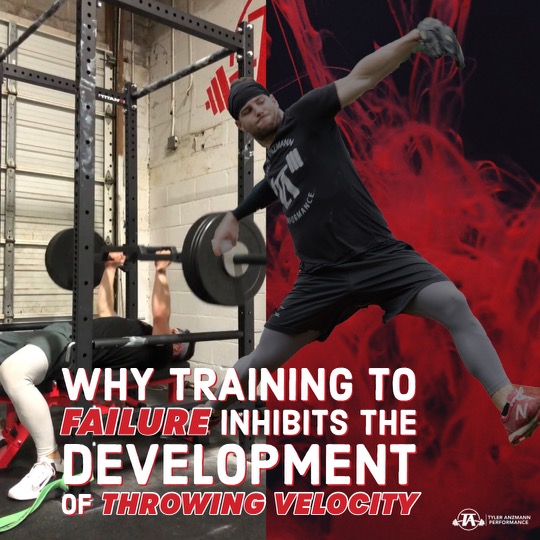 Training hard is a necessity if you want to maximize results from your training program. This is often misconstrued as the need to train to failure on every set of every movement. While this may lead to some results when an athlete first begins training, is this the optimal way to train when we’re trying to maximize throwing velocity?

Let’s first discuss the adaptations that are necessary to help improve an athlete’s throwing velocity. We can divide these adaptations into two categories: neurological and physiological.

For a more in-depth discussion about these specific adaptations check out this article where I dive deeply into this topic.

What Happens When You Train to Failure

Training to failure, or close to the proximity of failure, has long been popular in the bodybuilding and “gym bro” world as it is assumed that this maximizes hypertrophy. While training to failure does have implications related to hypertrophy, we need to dig a bit deeper than this when training for increasing velocity. The need for reps close to failure is more important when it comes to training with light loads. This is because one of the main factors when it comes to hypertrophy is mechanical loading. This means how significantly individual muscle fibers are activated and utilized during a set, as well as, what capacity these fibers have for growth. When a light load is lifted, low threshold motor units, which tend to be primarily composed of type I (slow twitch) muscle fibers, are activated. This is because it does not take much force to move these loads. The problem with this approach is that in order to maximize muscle growth high threshold motor units are important as these are primarily composed of type II (fast twitch) muscle fibers which have a greater capacity for hypertrophy. When a heavy load is lifted on the other hand (generally greater than 85% of 1RM), high threshold motor units are immediately activated. This helps reduce the need for training to failure as early in the set we are getting a lot of mechanical loading.

Implications of Training to Failure

Training to failure leads to some results that are important to understand when evaluating its fit in a program.

Designing a training plan ultimately comes down to balancing the fatigue that comes from a specific training session or series of sessions, with the ability to recover and adapt to the training. When training to failure, fatigue is increased considerably along with soreness, and this fatigue tends to be longer lasting even when volume is equated (Fonseca et al., 2020). This has important implications for the other training that will take place over the course of the next few days and beyond. When it comes to training athletes the most important piece of their training program is sport-specific practice. In the case of pitchers this means a relatively high volume of throwing and throwing-related drills. If the quality of these sessions is impacted negatively by what an athlete does in the gym, then it’s obvious that the weight room side of the training plan must be adjusted. In order to maximize the effect of sport-specific training, maximum quality must be achieved. This means extreme focus on every rep and low fatigue so that the output during high-intensity sessions can be maximized in order to drive maximal adaptation.

This can have even more serious implications in-season. Due to the frequency of games, in order for performance to be maintained throughout the season various fitness qualities may need to be touched-up in minimal retention doses. This is even more critical for relievers that pitch more frequently and may need to microdose training to focus on specific fitness qualities. In order for this approach to work, fatigue cannot be carried after the session. The fitness quality should be touched with a minimal number of high-intensity sets that do not approach failure. The closer the athlete gets to failure, the more negative impact these training sessions are likely to have on on-field performance.

One of the positives of training to failure is that it does tend to result in more hypertrophy (if you’re training with light or moderate loads), and greater muscle cross sectional area (CSA) (i.e. hypertrophy) has been shown to be associated with greater strength.

However, there are also some negative effects of hypertrophy. Tissue inertia is an important factor to consider. Since the muscle is larger, it takes longer for the muscle to shorten and create movement at the joint (Gunther et al., 2012). This means that in order to create the same joint angular velocity as before, the muscle contraction would need to be even faster since there is more to shorten. This can have obvious negative effects on a time-constrained movement, such as pitching, where contraction velocity is extremely important.

Stiffness, in terms of the ability to resist deformation is an important quality for connective tissue and has implications for force transfer and movement velocity. Heavy resistance training and high-velocity movements have been shown to increase stiffness (Bohm et al., 2015), but high repetition training with light loads has not shown a similar positive effect.

As discussed above, if the goal is to maximize movement velocity then an athlete must maintain the highest possible number of type IIx muscle fibers. The more fatigue that occurs during a set, the greater shift there is from type IIx to type IIa fibers. This is definitely a negative for pitchers and is made worse by training to failure.

What To Do Instead

So, what should you do instead of training to failure? There are a few options that can improve your results.

Sets with a Specific Velocity Loss

The first option is the most optimal as the feedback is most objective. Training with a specific velocity loss involves planning a movement with a specific adaptation in mind. Just as you would use percentages of one-repetition maximums (1RM) when planning a session, you can do the same with movement velocity. For example, when training speed-strength you would use a load in the 40-60% range. When training speed-strength and utilizing velocity based training, you would use a load that you can move in the 1.0-1.3m/s range (Mann, 2016). In this scenario you would train with the highest possible load for the velocity desired, and when a predetermined velocity drop-off is hit, either the set, the movement, or the session is terminated. Here’s how a speed-strength session may look:

In this scenario, training volume is being autoregulated which keeps intensity high and allows an athlete to maximally develop a specific quality as we’re able to give them exactly as much as they need without adding detrimental fatigue.

The second option is still a great option if you do not have access to velocity tracking tools. With reps in reserve athletes are still able to autoregulate training based on how they’re feeling on a given day, and the specific adaptation is still able to be trained without fatigue being added.

Here’s how a high force session using reps in reserve (RIR) might look:

The athlete will select a load that can be lifted 6 times (their 6RM on this day), but each set will only be three reps. This allows athletes to handle very heavy loads (~85% in this case) while minimizing excess fatigue. This also allows athletes to base the load on how they’re feeling on a given day, rather than rigidly sticking to pre-planned percentages which may be too heavy or light on a given day.

The third option is my personal favorite for maximizing hypertrophy gains without sacrificing as many type IIx fibers as typical hypertrophy training. This option breaks up higher rep sets into smaller clusters allowing movement velocity to stay high, heavier loads to be handled, and more type IIx fibers to be preserved.

A cluster set aimed at higher load hypertrophy may look like this:

In this case an athlete would perform 4 front squats, rest 15-30 seconds, then perform the next 4 reps. This will still be a relatively challenging set, but compared to a set of 8 straight reps at 80%, which is about an 8RM, the movement velocity will be higher. Cluster sets can be split up in many different ways and the above layout is just one option.

When training to increase throwing velocity we should have one of the following broad goals: move light loads very fast or move heavy loads with maximal intent. On the light load side of things, we’re trying to move weights very fast in order to obtain specific high velocity adaptations which require low fatigue. If you’re training to failure or close to failure with this method you are no longer achieving that goal. If you’re training to improve maximal strength then you’re likely using heavy loads at or above 85% of 1RM, which means that motor unit recruitment is already maximal. Training to failure in this case does not increase motor unit recruitment any further. While no training method is inherently “good” or “bad” training to failure is a poor choice for athletes trying to maximize throwing velocity.