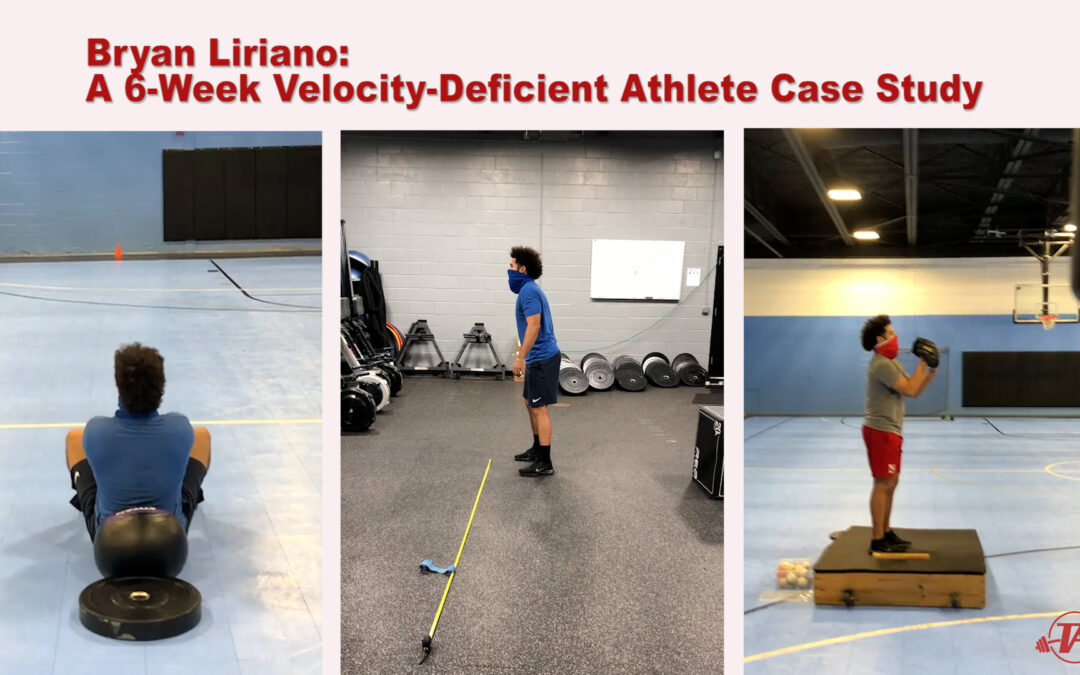 At the beginning of an athlete’s training journey interventions can and should be very simple and will often lead to impressive results. As an athlete advances and begins to achieve basic abilities, such as maximal strength levels, finding weak links becomes more difficult and training interventions often must become more specific. Bryan is one of my college athletes who is beginning to enter the high intermediate stage of his training career. He came to me with a 6-week timeline heading into his baseball season and this will outline what we did and the results he achieved.

The first step in the process is the assessment. This entails identifying any significant mobility or movement deficiencies that may present road blocks to the training intervention. After this, the force velocity assessment helps reveal an athlete’s primary competencies and where training may be best directed to improve on-field performance.

Here’s a look at two of Bryan’s test results which profiled him as velocity-deficient:

As you can see just from looking at these numbers, Bryan is velocity-deficient: his lighter med ball velocities do not improve by the relative amounts we would expect.

This score is very low and shows a lack of reactive strength, which given his strength base (deadlift 2.3 x BW) can help direct us in our programming. For reference, an RSI below 1.5 is considered extremely low, with 2.0 being solid, and 3.0 and above being elite. For a more in depth review of reactive strength, why it matters, and how it’s calculated check out this article.

With this compressed 6-week cycle I planned things a bit differently than I typically would. We began with a 2-week cycle focused on eccentric actions to achieve some significant tissue adaptations and neural adaptations from the low dose, high intensity max strength work we included in this cycle. We also used extensive plyometric variations for the upper and lower body for similar purposes. As I’ve written about in the past, extensive plyometrics help prepare the tissue for the intensive variations to come, allow for lower intensity practice of the movements, and also help an athlete learn to be more rhythmic. This was the only cycle in which max strength loads were included in his program due to the compressed nature of his timeline. Note that if we had longer he would have had higher loads cycled back in at strategic points throughout his program.

The next 2-week cycle we began to use more intense plyometric variations, the overall velocity increased, and the highest loads he used were peak power loads. Throughout this cycle we monitored the quality of every rep via a Push Band and used a 3-5% drop off from his best reps as a cutoff based on the day and movement we were performing. During this phase we used primarily unilateral plyo variations given that he was prepared for them during the extensive phase and unilateral variations tend to use a bit longer ground contact times, and therefore greater muscle activation.

The final 2-week cycle featured complexes, the most intense plyometric variations of the 6 weeks, and the highest velocities. One of the complexes we used was band resisted DB Bench Press and Partner Drop Med Ball Chest passes. We kept the DB velocity between 0.9 and 1.0 m/s (roughly a 60% load) as post activation potentiation has been shown to be most effective with loads between 60 and 84% (Wilson et al., 2013).

We didn’t use any assisted movements (overspeed or band assisted variations) here, but with a more advanced athlete, and/or closer to a season this is the cycle I would have used variations in that category.

The results were impressive. Bryan increased all of his metrics by 3-15%! As expected, the results were specific to the primary velocities trained-the movements involving the stretch shortening cycle and the lightest med ball loads improved the most.

Here are the results for a few of the KPI’s we targeted:

We tested a few more ball weights and jump variations that also improved in the 3-15% range, but these are the most relevant.

As far as how this all transfers to improvements in mound velocity, due to certain scheduling and school requirements Bryan had a more compressed throwing program than I would have preferred. However, he did still hit a mound training PR of 85 mph at submaximal effort. This is up from his previous training PR of 82 mph. Over the next few weeks he should continue to see throwing velocity improve as well as he gets more mound exposure and can begin to transfer his improved physical capacity into on-field performance improvements.

A compressed timeline doesn’t have to mean you have to lower your expectations for improvement. With a deep understanding of training principles and an appropriate assessment, a motivated athlete can achieve impressive results even in a short time.