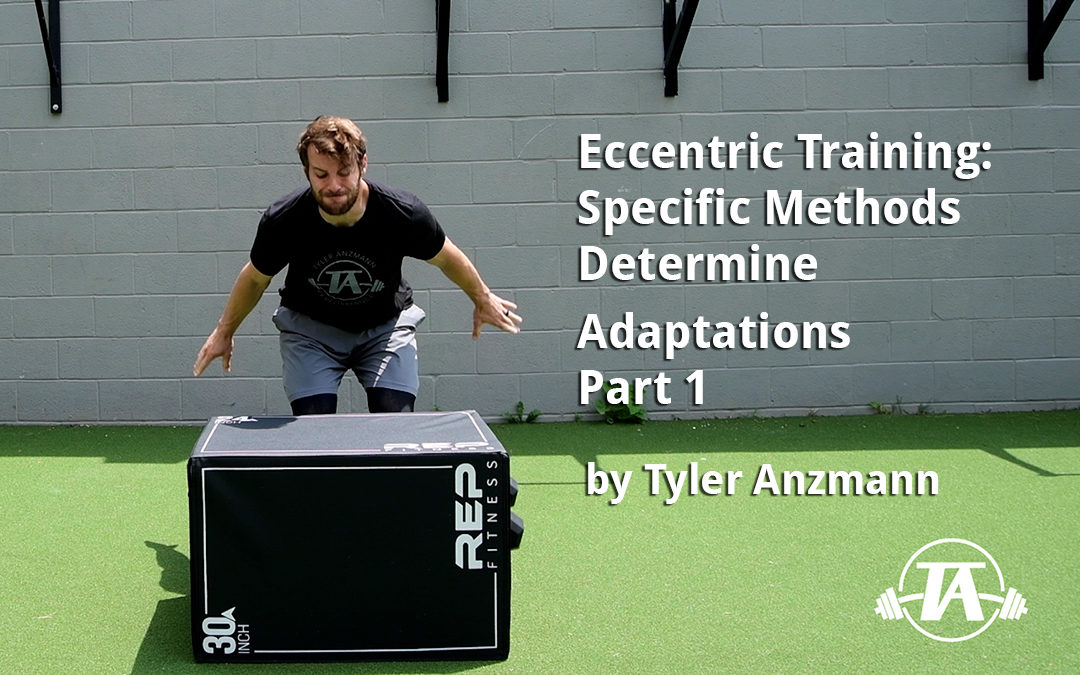 Every sport relies on the ability to abruptly decelerate. The specific context of that deceleration may differ a bit, but it is present in every sport. If you want to throw gas, jump high, or juke someone out of their shoes, you have to be able to stop suddenly. This sounds simple, but if you’re a high-level athlete, this means stopping a significant load. In order to do this effectively an athlete must be strong eccentrically and isometrically, but there are multiple ways to train eccentrically and isometrically and the specifics of the training methods can lead to different results. This article series will focus on eccentric training specifically, stay tuned for the isometric article series.

What Is An Eccentric Action?

Muscle actions are typically divided into three types: eccentric, isometric, and concentric. Eccentric muscle actions are lengthening actions. They are the result of force applied to the muscle tendon unit (MTU) that exceeds the force produced by the MTU, leading to a lengthening action during which the muscle continues to produce force. Eccentric actions are often referred to as “negatives” or “negative work” because the muscle is absorbing energy, rather than producing it (Abbott et al., 1952). For example, during a bicep curl, the lowering portion is an eccentric action.

What Makes Them Different?

The benefits of eccentric training are not all fully fleshed-out, but there are many likely benefits that have a fair amount of research behind them.

Note: The next two sections may be a bit dense. If you’re interested in just an overview and practical application, scroll down to the “TLDR” section.

There are a variety of training methods that can be used to train eccentric actions, and the first one we’ll cover is accentuated eccentric loading.

Accentuated eccentric loading (AEL) involves loading the eccentric portion of a movement heavier than the concentric portion of the movement. AEL can be performed with weight releasers, manual changing of plates, manual resistance, dropping dumbbells after the eccentric phase, or releasing band tension after the eccentric phase. The research on AEL is somewhat limited in terms of consistent loading recommendations and general protocols, however, there is a significant amount of interesting and encouraging research regarding the benefits of this method.

AEL can be used to load the eccentric portion of the movement supramaximally or submaximally, depending on the goals of training. AEL has been shown to acutely potentiate concentric strength performance (Doan et al., 2002), but fatigue can quickly become a limiting factor, especially if supramaximal methods are used.

Whether you use dumbbells, bands, or other creative methods, AEL during explosive movements has been shown to improve throw and jump performance (Sheppard and Young, 2010) (Aboordarda et al., 2013) (Sheppard et al., 2007). Loading does seem to make a difference based on the strength level of athletes and the movement chosen. In a study performed by Sheppard and Young, they showed that all athletes improved their concentric performance in the bench throw at three different levels of accentuated eccentric overload (60kg-40kg, 70-40, 80-40). However, they noted that there is likely an optimal level of eccentric overload for each individual to maximally improve concentric performance. And that stronger athletes benefitted more from heavier eccentric loads and weaker athletes benefitted more from lighter eccentric loads (Sheppard and Young, 2010).

Loading that is too heavy or exercise selection that is inappropriate may not have the desired potentiating effect for a few reasons. If the loading is too heavy the amortization phase may become too long and not allow for adequate use of the stretch shortening cycle (SSC), and may change movement mechanics too much. If the movement selection is inappropriate an athlete may not be strong enough to benefit (Aboodarda et al., 2014) or may be asked to move through too great of a ROM to properly use the SSC (Moore et al., 2007) (Wagle et al., 2017). However, if the loading and exercise selection are appropriate, performance enhancement is more likely to result (Sheppard et al., 2007).

One potential negative could be the hypertrophy that seems to take place in the distal part of the muscle as opposed to the muscle belly (Franchi et al., 2014). This could have a negative impact on the speed of the distal segment during a proximal to distal sequence such as throwing. Research has shown that in elite sprinters, hypertrophy tends to be much more proximal for this reason (Kumagi et al., 2000), and it would follow that this would likely be same for pitchers, in terms of upper body musculature.

Accentuated eccentric loading is a method that seems well suited for intermediate and advanced athletes with a significant strength base and significant experience with plyometric and ballistic training.

As noted above, supramaximal loading may help improve maximal strength. However, if loading is too heavy for a given movement fatigue can eliminate the potentiating benefits. Additionally, if improving explosive performance is the goal, loading that is too heavy can lengthen the amortization phase to the point that the SSC cannot enhance the movement. If athletes are not already strong enough to store and utilize elastic energy during plyometric movements, they likely are not strong enough to benefit from an overloaded eccentric action. The load will be too great, too much deformation will occur, and the GTO will likely shut off the agonist before a high level of concentric force can be developed.

For athletes who check the boxes of strength level and ballistic and plyometric experience, how the accentuated eccentric is applied is an important consideration. Manual resistance during the eccentric portion, dropping dumbbells, and releasing bands are all good options that most trainees will have access to and work well for explosive movements. For jumping variations, countermovement jumps seem to be the best option, using either dumbbells, medicine balls, or band tension. Shock methods with additional load can be an option for advanced trainees who have a high level of strength, especially if drop height is limited. However, for many athletes the drop alone is enough additional load to provide benefit.

Weight releasers or manual resistance are necessary if supramaximal loading is the goal. Weight releasers are not common in all gyms, and if they are used, the use of straight sets or clusters must be taken into consideration. The worst option though, is having coaches or training partners remove weights at the end of the eccentric portion. This will likely happen too slowly and eliminate the potentiating benefit.

Manual resistance can also work extremely well for many movements, such as push-ups, bench press, squats, etc. Manual resistance is more difficult to quantify but can offer some potential motor learning benefits due to the inherent variation between reps.

Don’t mind the “pain face” the sun was in my eyes.

Eccentric muscle actions are capable of producing more force than concentric actions. If we take a squat for example, an athlete is stronger lowering the weight (eccentric), than he or she is lifting the weight (concentric). This means that even if you are lifting a weight that is sufficiently overloading for the concentric portion of the movement, the eccentric portion is not being adequately overloaded.

Depending on the goal of your training the way you use AEL should vary. If the goal is strength enhancement, the eccentric load will be significant (80%+ of concentric 1RM) and possibly supramaximal (in excess of concentric 1RM). Supramaximal loads should be used with care though, as they may lose their potentiating benefits shortly into a session due to the fatigue they create (Doan et al., 2002). Heavier movements are slower by nature, providing more time under tension and higher force output. This means that hypertrophy and strength improvements tend to be greater from this method.

If power and/or higher velocity improvements are the goal, then submaximal loads will be used exclusively. The load used will vary between athletes with stronger athletes being able to use relatively heavier weights than their weaker counterparts. Submaximal eccentric loading can be anywhere from 5%-95% depending on the goal and the athlete’s specific abilities. This may be an opportunity to use bar speed measuring tools to make sure the necessary velocity is achieved for the desired adaptation, but that’s beyond the scope of this article.

If plyometric movements are going to be used, loading should be used carefully. If the loading is too heavy it will change the movement and reduce or negate the potentiating effect due to a longer amortization phase (transition from eccentric to concentric) (Wagle et al., 2017). The studies on plyometric and ballistic movements seem to have the most success with AEL at the lighter end of the spectrum. Some studies have used 30% of concentric 1RM and seen benefits, and others have used a 20kg (roughly 45lb) overload for all athletes and also seen benefits (Aboodarda et al., 2013) (Sheppard et al., 2007).

So, now you’re probably wondering, “How do I actually use this and when?”

For example, let’s use a fascially driven athlete who needs to get a bit stronger. Early in the offseason you can bias their training towards enhancing their strength. Their 3-month AEL prescription may look something like this:

Note: The rest of the training session would not involve AEL.

As the offseason goes on the athlete needs to begin moving away from training their weaknesses and begin doubling down on their strengths to be prepared to compete on the field. For this athlete that means getting strong early in the offseason, improving power and strength-speed, and moving toward more elastic type movements as the season approaches.

Additionally, it should be noted that this method would likely not be used during the in-season period as it may cause undue soreness and fatigue. However, if it were to be applied a sport like football or to a starting pitcher on a 5 or 7-day rotation schedule, well-trained athletes could potentially make it work if they used it only on the day after competition to consolidate stress. But, experimenting in-season is generally not a great idea if the idea hasn’t been tested on a similar timeline in the offseason.

Eccentric training in general seems to have some encouraging benefits, in terms of performance and injury prevention, but there are several ways to train eccentrically. AEL is one method that can be effective for intermediate and advanced athletes. Stay tuned for part 2 of this series when we examine how the speed of the eccentric action affects the adaptations.

If you want to throw harder, check out our remote training! Contact me for more information and to set up a call.