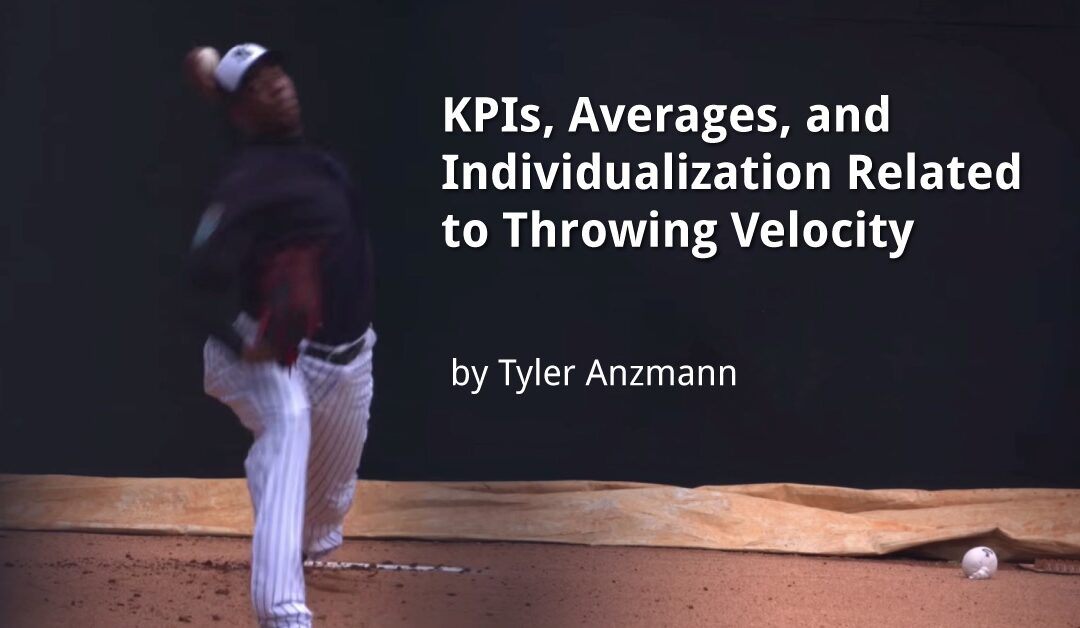 In all athletic endeavors key performance indicators, or KPIs, exist that help guide the training and development of athletes. High velocity throwing is no different in this regard. KPIs exist to help us compare ourselves or our athletes to elite level performers and show us where our strengths and weaknesses may lie. KPIs, by their nature, are the averages of high-level performers. Problems arise when KPIs are chased or attempted to be applied to all athletes in a rigid manner. Each athlete develops uniquely and has strengths and weaknesses that may make a specific KPI a poor indicator of development for them. It’s important to understand the why behind a KPI so that bandwidths can be developed and individual goals established.

There are certain norms and patterns that all high-level throwers possess. For example, no elite pitchers are striding with their ipsilateral leg, or throwing with a fully extended elbow as cricket bowlers do. KPIs allow coaches and athletes to build models that they can then train toward and check their progress as they go. While these models may be a composite of many elite performers, and by definition general, specific bandwidths can then be developed as more data is accumulated. Some pitchers may have longer strides, relative to their height than others, but most high velocity throwers will stay within between 80% and 90% of their height (Fleisig, 1994).

When we examine the throwing mechanics of individual throwers there are certain KPIs we look for that are associated with high velocity. Covering all of the KPIs is beyond the scope of this article, but we’ll briefly discuss a few examples-lead knee extension angle, hip/shoulder separation, and layback.

I’ve written about lead leg mechanics in the past and you can check that out if you’re interested, but an in-depth review is beyond the scope of this article. While we know that greater knee extension angle between maximum external rotation and ball release is associated with higher velocity throwing (van Trigt et al., 2018), this is just an average. This doesn’t tell us anything about an individual athlete’s body or specific abilities that allow them to throw their fastest. Knee extension angle will ultimately depend on an athlete’s specific mobility and laxity. Basically, how far do they need to go to take the slack out of their lower body and transfer energy to the upper body. Generally, throwers with greater laxity will need to reach a more extreme degree of knee extension in order to maximize their stability and energy transfer, whereas, more “stiff” athletes will not need to go as far to get the same benefit. Really, what knee extension and lead leg mechanics comes down to is the ability to stop forward movement of the lower body and quickly redirect energy against the direction of the throw. Knee extension angular velocity may be a better measure of a high performing lead leg (Fortenbaugh et al., 2009). Knee extension angle is merely a symptom of this as athletes who do not stop and redirect energy well tend to exhibit greater flexion angles. The point is, not every pitcher’s lead leg can or should look like Justin Verlander’s and trying to fit every thrower into that box is likely to cause problems. If the lead leg stops forward momentum abruptly, resists deformation, and is able to apply force against the direction of the throw, stop chasing full knee extension.

Hip/shoulder separation is simply the temporal difference between peak pelvis rotation angular velocity and peak upper torso rotation angular velocity. This time difference helps athletes to maximize the kinetic chain, or amplify energy, as it moves through the body. Basically, if the movement of body segments is well-timed and sequenced, the force produced by the whole is greater than the sum of the individual segments. Average upper torso angular velocity during arm acceleration is associated with higher throwing velocity (Stodden et al., 2001) and can be enhanced if hip/shoulder separation is used optimally by the thrower. The separation of the two segments places a stretch across the elastic elements (such as fascia) from the lead hip to the throwing shoulder, which if timed with muscular contraction, can greatly enhance the speed of the rotation. The stretch and optimal timing of release is what we’re after, not just more hip/shoulder separation as is often mistakenly taught. If the separation is not great enough then rotation speed is not maximized, but too much separation can have a similar dampening effect. As with lead knee extension angle, athletes should be allowed to find their optimal hip/shoulder separation based on their relative laxity or stiffness. Athletes with high levels of laxity will have to create greater separation to create an optimal stretch, while more stiff athletes will not have to create as much separation.

Layback is often talked about as it has been shown to be different between high and low velocity throwers, on average. High velocity throwers tend to be closer to 180 degrees while lower velocity throwers are closer to 165 degrees (Matsuo et al., 2001). This makes sense as increased layback helps to increase the distance over which force is applied to the baseball. It also provides a pre-stretch to the elastic elements of the shoulder, increasing the speed of internal rotation. However, a few important points to consider are that once again more stiff athletes will not need to go quite as far to remove slack and create that stretch (although they may get less benefit from the elastic elements). And, athletes with longer arms do not need to lengthen the distance of force application through their mechanics as much as shorter limbed athletes will need to in order to apply force over a similar distance. A final point worth considering is that if an athlete began throwing later in their life than others, they may not have as much retroversion and torsion of the humerus (Crockett et al., 2002). This is due to the status of the growth plates at the time they began throwing consistently. This may limit their physical capacity for greater external rotation.

Limitations of Focusing on Averages

If we rigidly train ourselves or our athletes to reach each and every average associated with high velocity throwing, we are likely to disregard what makes us/them unique and special. We’ve all been gifted with different anthropometrics, nervous system development, and muscle fiber type proportions. This means that while we may be able to target certain averages of elite performers, ultimately, we can’t excel at everything. We should develop our weaknesses to a level where they no longer present limitations to other attributes, but our greatest development will come from turning our strengths into elite level attributes. If you are okay at everything (decent fastball velocity, breaking ball, and command), you’ll never be good enough to play at the highest level. Mariano Rivera became an all-time great by leaning on one elite pitch for the majority of his career.

This is also why a program must target 1-2 specific pieces of development while maintaining the other elements to an acceptable level. This is the principle behind vertical integration. Keep all elements present at all times, but shift the primary focus as needed. If we apply this to mechanical changes, this means focusing on a specific “big rock” and targeting that with significant focus, while using maintenance volumes for the other elements. If you try to work on everything at once, no element will make significant improvement. This means you’ll stay okay at everything, and never develop into an elite thrower.

For example, not all pitchers will present with elite arm action based on our model. However, they may still reach high velocities based on how well they use their strengths. A great example of this is Jeurys Familia. He doesn’t have the most amazing arm action, but he’s big and strong (listed at 6’3”, 240lbs) and he uses his lower body very well. Each pitcher will create velocity in a slightly different way, and understanding the bandwidth that must be present in the model is crucial to individualizing your program.

KPIs and averages help present a roadmap for development, but a deep understanding of the movement must be present in order to maximize individual development. Don’t chase lead knee extension alone and assume that’s the key to higher velocity. Instead, understand the job of an effective lead leg and train towards that. The same goes for hip/shoulder separation or any other metric. Not all athletes are built or developed the same way, so their solutions will look a bit different. As long as they fit into a bandwidth you’ve established, let them be and look for other areas of opportunity.

Stay tuned for part 2 where I’ll discuss what this means for training in the gym as well. Do you need to squat or deadlift a certain amount to throw 90mph?

Interested in throwing harder? Contact me and let’s set up a call to discuss your needs and training options.