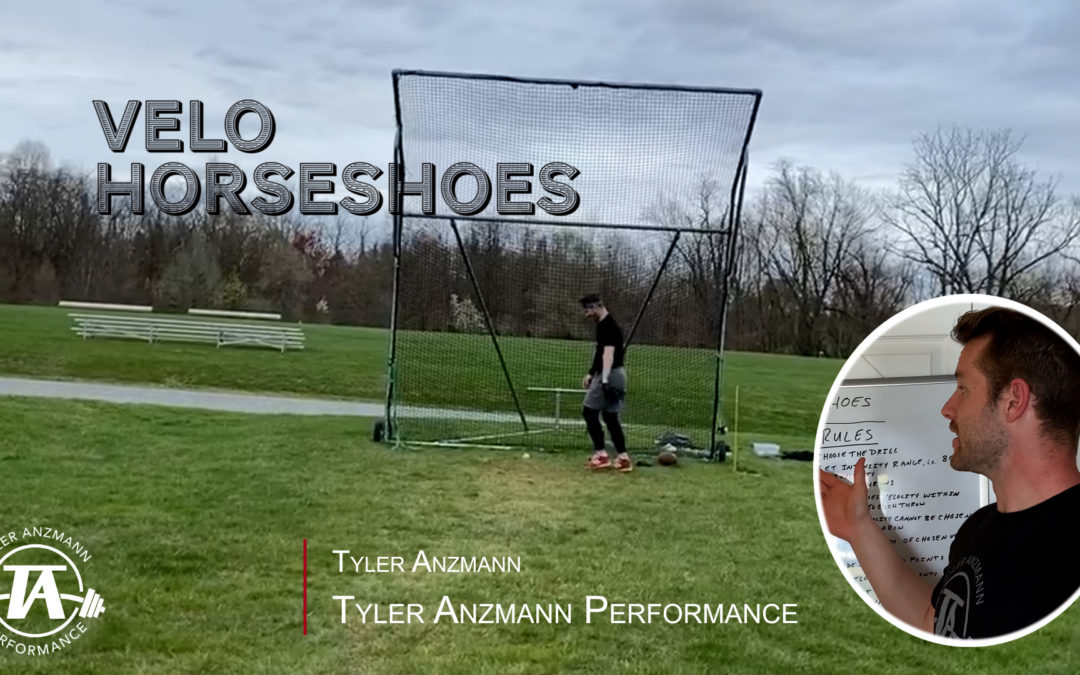 Athletes who want to be the best often put a ton of pressure on themselves, are extremely invested in their training, know their PRs, especially on relevant KPIs, and this can get in the way of “free and easy” performances where the athletes enter flow state and subconsciously perform at a high level.

While gameifying training is common practice with younger athletes (especially under 14), games can help get better results from advanced athletes as well. Games allow an athlete to focus on a specific task and can take some of the pressure off of achieving PRs. This isn’t necessary at all times throughout the year, but if an athlete is struggling, training is getting stale, or a big showcase or event is close, gameifying training can help improve results.

I got the idea for velo horseshoes from the Rewzon long jump study and listening to Joel Smith’s Just Fly Podcast episode with Sam Portland. In the Rewzon study one group jumped to maximal distance every jump, while the other group jumped to a variety of mostly submaximal distances. The variable distance group outperformed the maximal distance group over the long-term. In his podcast episode Portland discusses “speed gate golf” which he uses to make a game of sprint training with his rugby players. Rather than sprinting all out, athletes attempt to get as close as they can to a submaximal time in a “technically correct” manner. They also use various running drills during their “speed gate golf” game to help lock in the rhythm of said drills.

These ideas can be applied to throwing a baseball. Sprinting and throwing velocity are both single output events that involve complex movement patterns being sequenced rhythmically and are highly impacted by a variety of factors that ebb and flow throughout the week. Because of this, testing may happen on a day when the CNS is not as ready (especially if you don’t have a baseline test in place for this) and the performance may be lower, which has the potential to negatively affect the athlete’s motivation to continue to train hard and their belief in the program.

Additionally, athletes often try to do too much and they end up performing worse. I’ve seen this often on high intensity days. A pitcher’s first throw is 90mph at “85%”, and they never exceed that number by more than 1mph the rest of the testing day.

Two things. One, the athlete probably tensed up too early, and we know that early tension in a muscle disrupts movement sequencing and energy transfer, leading to lower velocity. As Dr. Matveyev found the athlete who is able to relax the antagonist the fastest is often the superior athlete. You can see them gritting their teeth and death-gripping the baseball, as if trying as hard as they can will make them throw 100mph. This is not the case. There’s a fine line between correctly applied intent and disruptive intent.

The second factor at play is that the athlete was allowing his body to move without thinking because the velocity of warm-up throws “don’t matter.” So, he didn’t overthink what he was doing and just moved freely. However, once he heard a good number he thought, “If I actually try hard I’ll throw way faster.”

This is similar to the idea of steadily increasing velocity during a bullpen as Dave Coggin of PFA Baseball has discussed before. However, in velo horseshoes the velocity does not always increase. This game can be used at any intensity, but it seems to be most effective between 80 and 95%.

In velo horseshoes throwers attempt to get within 1mph of the goal velocity on each throw. For example, if a pitcher’s best rocker throw with a baseball is 90mph, the goal may be 82mph. If they do not throw 81-83mph they do not get a point. If they do, they receive a point. If they hit the exact number they receive 3 points. The goal is to accumulate as many points as possible for the set number of throws. If the athlete is feeling especially good and they are within 2% of a PR number, they will be allowed to use max intensity to attempt to break the record.

Throwers stay relaxed, they don’t feel pressure, and they focus on the game. This can lead to unintended PRs but at the very least it’s a nice change to the monotony of high-performance training.

Give this game a try and send me your videos to be featured on the site and social media!