What Can Sprinting Teach Us About High Velocity Throwing? Part 2 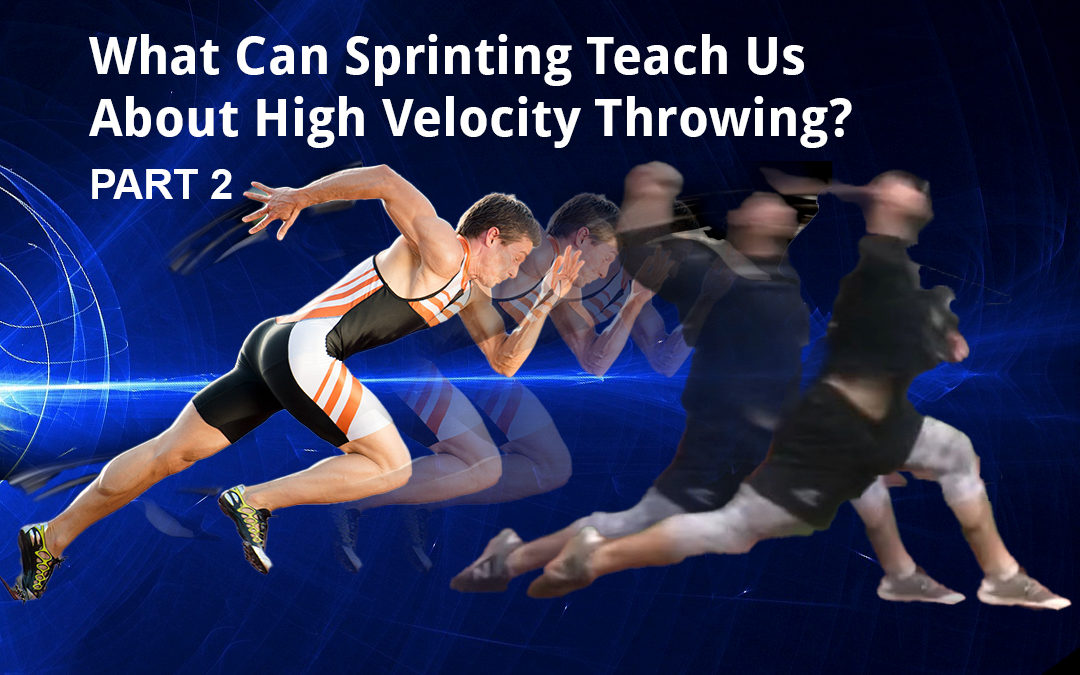 In Part 1 of this article series we discussed a few elements of sprinting that can help us understand high quality movement on a deeper level and allow us to examine high velocity throwing through a different lens. In Part 2 we’ll continue that discussion.

All athletic movements that effectively use the kinetic chain use a proximal to distal sequence of muscle activation. Meaning, muscles located proximally (closer to the center of the body) produce a large amount of force relatively slowly (slower RFD) and then, if the movement is properly sequenced, the smaller muscles, with lower force producing capabilities but faster RFD, that are located more distally (farther from the center of the body) transfer/amplify that energy.

In sprinting, the hips are producing a ton of force and the elastic tissues of the ankle are amplifying and transferring that energy with every step.

This is one of the reasons that maintaining a loose grip on the baseball and a relaxed arm for as long as possible is a must. The muscles of the legs and trunk are producing large forces to be transferred into the ball via the arm. However, if the distal muscles fire too early, energy will not be effectively transferred and amplified.

A whip cracks via a proximal to distal sequence. Credit The Slow Down Show

Athletes are successful for different reasons and sprinting is a great example of this. There are extremely strong, muscle driven athletes like Mo Green or Ben Johnson (reportedly a 600lb squatter) who are great starters and were very successful during their careers. Then there are elastic, fascial driven athletes like Carl Lewis and Usain Bolt who are not as strong, often do not start as well, but their upright sprinting is so good due to efficient elastic return, that they are also extremely successful. Once sprinters reach maximum velocity they begin decelerating shortly thereafter. The sprinters who can decelerate less are those who pull away from the competition. Efficient elastic return plays a role here because it takes less energy to maintain a high speed and allows athletes to “effortlessly” run incredibly fast.

Pitching is similar in this regard. There are extremely strong, muscle driven pitchers like Justin Verlander who are very successful. He is very big and strong, uses his lower body extremely well, but he doesn’t use upper body elasticity as well as others (minimal hip/shoulder separation) and yet still throws in the mid to upper 90’s. Then there are elastic, fascial driven athletes like Edwin Diaz who are successful for different reasons. Edwin Diaz does not sit into his back leg and take a long time to build up a ton of force like Verlander does. Instead, he quickly turns his hips and relies on the elastic energy that’s being stored and transferred via significant hip/shoulder separation and ridiculous movement segmentation.

Fast Relaxation of the “Natural” Athletes

Excessive tension causes problems in all sporting movements. Watch Usain Bolt and you’ll see his face and shoulders are relaxed. His cheeks are bouncing and his shoulders are popping up and down. Throwing a baseball should be done with a similar principle in mind. Early tension causes inefficient movement sequencing and poor energy transfer. Don’t death grip the baseball, grit your teeth, or shrug your traps up to your ears or you won’t be able to maximize energy transfer into the ball.

Everything in movement and sports is created through rotation. Even when you see linear movement, the joints creating that movement are rotating. Sprinting is no different in this regard. While sprinting is a linear activity, rotation can help improve an athlete’s speed when used correctly. This goes along with the idea presented above with regards to the “smoothness” of a natural athlete. These athletes naturally use rotation, while athletes who have been overcoached, or have a less robust movement history, move in a more linear fashion.

Rotation of the hips helps a sprinter to produce force over a longer arc of motion, or effectively lengthen the lever arm. This can be applied to throwing a baseball as well. Look at the pitchers who train with Dr. Mike Marshall. While he has helped shape this industry in many regards, not all of his ideas have had the performance effect that is needed to make them more mainstream. His pitchers use a much more linear arm path and therefore use a shorter lever arm. As a result of this and a few other factors, they do not throw as hard as pitchers using more conventional, rotational mechanics.

All athletic movements share commonalities and examining those commonalities can help provide context and understanding for coaches and athletes in order to improve mechanical models and on-field performance. Understanding human movement in one sport offers many parallels to help improve mechanical models and athletic performance in other sports. Stay tuned for Part 3 where we’ll discuss programming!